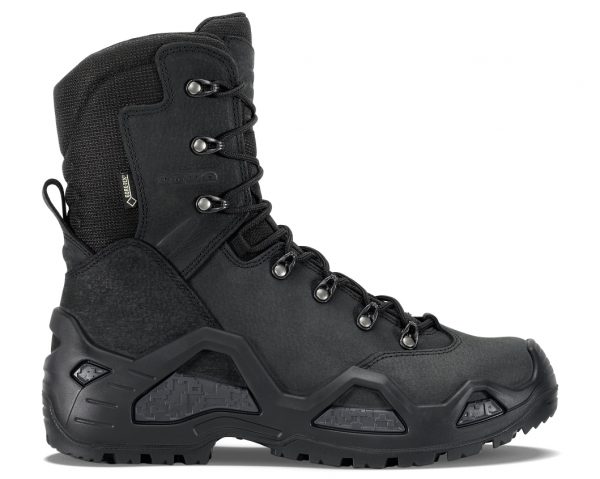 With the Z-8N GTX® C WIDE, LOWA has created a robust task-force boot that is both very stable and lightweight. It is perfect for missions performed on challenging terrains and for marches with medium-heavy backpacks. The eight-inch (20-centimetre) high upper made of tough Nubuck leather provides optimal support. At the same time, the durable PU material used in the sole that comes in various degrees of rigidity provides exceptional cushioning and stability.

Wind, rain, exhaustion: The full range of miserable weather conditions really comes into play during long missions. Anyone who is looking for a dependable partner who can provide optimal support even during marches needs to look no farther than the  LOWA Z-8N GTX C.

The major features of the Z-8N GTX C WIDE are the stability and support it provides in every situation. For this reason, this robust task force boot is constructed of an upper material that is made of espe­cially top-quality and tough suede leather. To ease the stress placed on ligaments, muscles and joints during extended missions, the durable poly­urethane material of the sole has a range of hardness levels, a feature that creates excep­tional cush­ioning and stability.

The Z-8N GTX C WIDE is much more than a stable, supportive boot. It is also a highly func­tional light­weight footwear. It is perfectly designed for missions carried out on chal­lenging terrain and performs excep­tionally well on marches done with moderately heavy rucksacks. The boot gets the support it needs from the complex design of the LOWA Tactical Z Trac sole. The multi­faceted qualities of the mission-optimized rubber mixture and the profile of the sole design are enhanced by its heat- and cold-insu­lating qualities. The waterproof GORE-TEX membrane stitched into the footwear also provides continuous and reliable protection from outside dampness – even during sweat-generating activities.