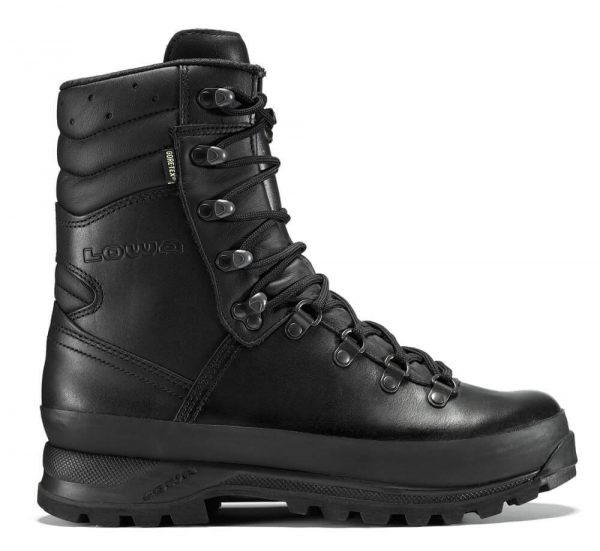 Robust, stable and tough: These are the qualities of the task-force COMBAT BOOT GTX®, footwear that comes with a high-quality upper made of full-grain leather and with a wrap-around rubber rand. The heavy-duty model is designed in particular for venturing out on missions with heavy loads on the back. It provides highly effective protection to feet and is made with chemical-resistant GORE-TEX®.

The LOWA Combat Boot GTX WIDE TF is robust, stable and tough. The task force boot comes with a high-quality upper made of full-grain leather and a wrap-around rubber rand. It is designed in particular for marches conducted with heavy backpacks. Thanks to its chemical-resistant GORE-TEX membrane, the boot offers complete waterproofness while remaining breathable during use, a quality that ensures the highest level of wearing comfort even under adverse conditions during long missions. The heat- and cold-insu­lating sole complex of the certified model is anti-slip. It is also resistant to oil, petrol and contact heat. The Combat Boot GTX WIDE TF is anti­static as well.

Certified work shoe according to:

“I’ve tested them across all seasons, in sunny heats, hiking over snowy covered moors and all of the various types in between. These Combat boots have stood up very well to all the environments I have tested them in, they certainly pass the wind, rain and cold tests with flying colours. My feet were kept warm and dry in all of those conditions. […] In conclusion the LOWA Combat boots really are as good a boot as everyone says they are, from both a military perspective and also as a hiking boot.”

“Lowa Combat GTX boots not only protect and support your feet and ankles, but do so with a superior level of comfort.  With no breaking in time you can literally hit the ground running.  […] “they just slip on like an old pair of slippers right out of the box, and they look awesome”.”