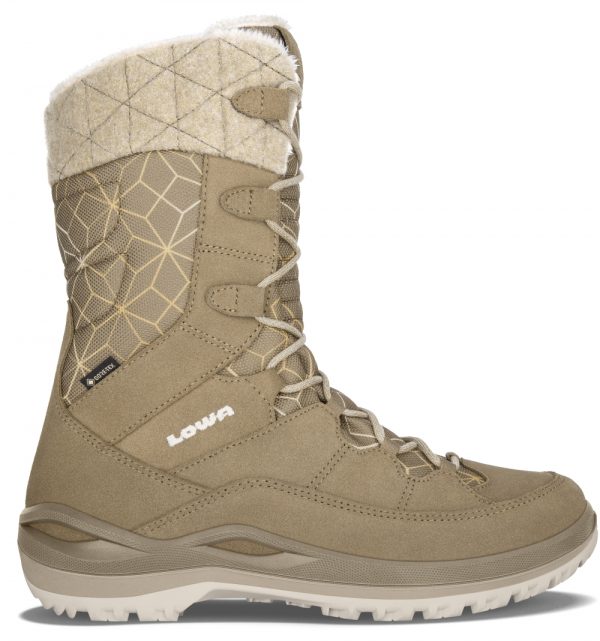 The trendy winter boots LOWA BARINA III GTX Ws meets every need. This winter boot shines in both optical and functional terms. It’s many fashionable details turn it into a true eye-catcher.

LOWA TPU Outsole: Conceived and developed by LOWA, this TPU outsole has a tread design with varying lugs based on intended use. TPU’s advantages include excellent abrasion resistance, better flex, and the ability to use thinner and lighter outsoles. Ideal for casual, urban use.

The footwear is flexible and supports natural rolling prop­erties as a result.

The trendy winter boots for women LOWA Barina III GTX Ws meet every need. This winter boot shines in both optical and functional terms. Its many fashionable details turn it into a true eye-catcher. The LOWA Barina III GTX winter boot is made of a robust material mix with quilted elements made of microfibres, felt and full-grain leather and for its patented LOWA Monowrap frame that provides a rein­forcing layer of stability. The result proves to be too much for the eye to resist. We updated this lightweight mid-calf cold-weather boot with a hidden side zipper for easy on/off. Teamed with a waterproof and extra warm Gore-Tex Partelana lining, cold and nasty wet weather does not stand a chance. When winter shows its most beautiful side, the LOWA AL-S IV sole is in its element. It excels thanks to a stud profile that is designed for the wiles of winter and its proven rubber compound. The new design of the upper, on the other hand, is refreshingly different, adding a touch of elegance to the footwear. Designed for a women’s foot and built on a women’s last for extra comfort.

Did you know? All LOWA footwear is 100% made and sourced in Europe! This means the fabric, and other materials that go into a LOWA are all manufactured under the world’s most strict environmental and humanitarian standards. In the EU, fair labour and environmental standards are the law of the land. LOWA’s strategy of producing 100% of its products in Europe and remaining in its headquarters in Jetzendorf still proves itself a model of success. Customers appreciate the combination of tradition and innovation and value the function, quality and fit of LOWA footwear.